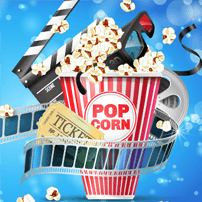 Time and time again, it has been found that the most popular online casino slots are those that are based on familiar brands, whether books, characters, comics or movies.

Blockbuster movies have proven to be a huge inspiration to online casino software groups, and excitement begins to build up months before these games are actually released.

Software groups such as Microgaming and Playtech are at the fore of this genre, creating slots based on movies on a regular basis.

We take a look at the top 10 movie themed online slots which can be found at the best UK online casinos. 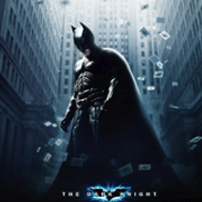 Based on the legendary Batman themed movie, The Dark Knight Rises, Microgaming's slot game is a 5 reel, 243 lines machine that is also a sequel to the popular Dark Knight slot.

This sleek, ultra modern game brings all the excitement of the superhero theme to the reels, while rewards come faster than you can say Robin. Enjoy wilds, scatters, multipliers and free spins.

Some of the more interesting features include wilds that can take on various forms, depending on the gaming mode, such as Super Stacked wilds, Heat Seeking Wilds, Split Wilds and more.

A Free Spin Accumulator feature sees Batman and his archrival Bane fight it out, with free spins and multipliers swinging your way. 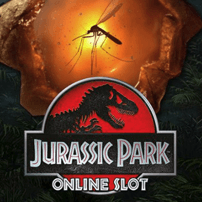 Steven Spielberg's 1993 blockbuster movie, which triggered a full series of prehistoric sci-fi films, is given its proper place on the reels thanks to Microgaming's 243 pay line video slot game.

Jurassic Park slot brings with it giant sized entertainment and rewards, starting with a Mosquito Stuck in Amber scatter which triggers the lucrative Free Spins bonus feature. Whenever the T-Rex lands on the reels, the Alert Mode kicks in, with the chance to eventually win up to 35 wilds.

Five free spin features are named after dinosaurs, each with their own rewards (multiplier wilds, more free spins, re-spins, etc.) 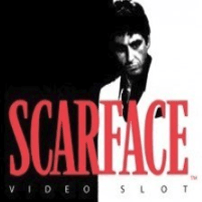 The characters of the classic Brian de Palma 1983 movie, Scarface are brought to the reels by the software group, NetEnt. The unforgettable mobster, Tony Montana, is the star of this 5 reel, 20 pay line. NetEnt has incorporated some of the scenes from the original movie, and has added excellent animations of its own.

The movie clips, graphics and original music from the movie are superb, making this a hugely popular game at NetEnt casinos.

The multi Academy Award winning movie starring Russell Crowe as a Roman Gladiator was turned into an unforgettable jackpot slot game by Playtech.

The Gladiator Jackpot Bonus feature, triggered by 3 Gladiator Helmets, has the chance to pay out the progressive jackpot linked to this game. Players have the potential to win literally millions through this feature. 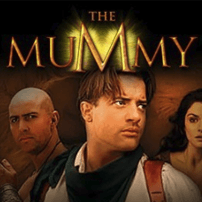 The Hollywood blockbuster movie, The Mummy, was released in 1999, starring Rachel Weisz and Brendan Frazer.

Playtech took its ancient Egyptian adventure theme and turned it into a game that remains popular among players today thanks to its immersive gaming environment and excellent sound and visual effects.

Besides the usual wilds and scatters, players get to enjoy eight special bonus rounds, including a randomly triggered bonus Mummy Hunt that has players searching for mummies and annihilating them. A whopping 10,000 coin jackpot clinches the deal for this game. 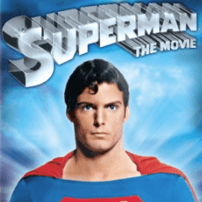 Players who loved bingeing on Playtech's Marvel Comics superhero slots were obviously disappointed when these games disappeared from online casinos because of licensing issues. However, Playtech offers other superhero movie themed games that are just as entertaining, not least of all its fantastic Superman The Movie slot - based on the original 1970s blockbuster starring Christopher Reeve.

This 5 reel, 100 pay line game has some spectacular bonus features, including the Save the Game Free Games feature which boasts a sticky Superman logo symbol for some extra large rewards. 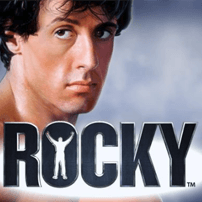 The Italian Stallion visits the reels of Playtech's Rocky slot, which brings with it all the drama, nostalgia and passion from the original 1980s movie.

Rocky Balboa, just like in the iconic movie, is the star of the show and makes his appearance along with characters such as his wife Adrian and his ring rival Ivan Drago.

Win big by spelling ROCKY anywhere across the five reels, while the Knockout Bonus pulls quite a punch as you head out to a 10 round match. The free spins feature adds more wilds to the reels and comes with a 2 x multiplier.

Phantom of the Opera 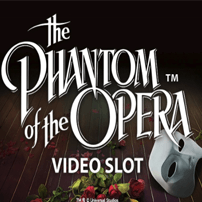 Name: Phantom of the Opera Slot

World-renowned music, stunning graphics and a suspenseful plot all await players of Microgaming's Phantom of the Opera slot, based on the critically acclaimed 2004 movie by the same name.

The 5 reel, 243 ways to win slot comes with two random features, Phantom's Favor and Chandelier Bonus. In addition, you can look forward to two free spins round, Dancing Wilds and a Masquerade Click and Pick feature.

The beautifully designed slot can be played on PC, mobile or tablet.

Creature from the Black Lagoon 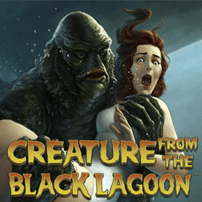 NetEnt has taken a classic 1954 film and turned it into a state-of-the-art slot game in its Creature from the Black Lagoon slot. Centered around two scientists who travel down the Amazon in search of a strange prehistoric creature, the five reel, 20 line slot has all the big tickets to ensure maximum entertainment and rewards, including Spreading Wilds, Sticky Wilds, Free Spins and Re-spins.

The animations and graphics in this slot are worth an extra mention, while the heart-stopping music adds another excellent touch. 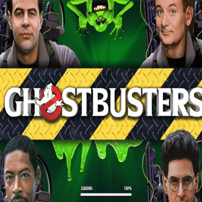 If you're after a slot game based on a legendary 80s movie, who gonna call? Ghostbusters!

IGT's 5 reel, 30 pay line slot is a fast-paced, well-designed and highly entertaining game with lots of bonus features to keep everyone entertained.

Ghostbusters slot incorporates characters and symbols from the iconic movie.